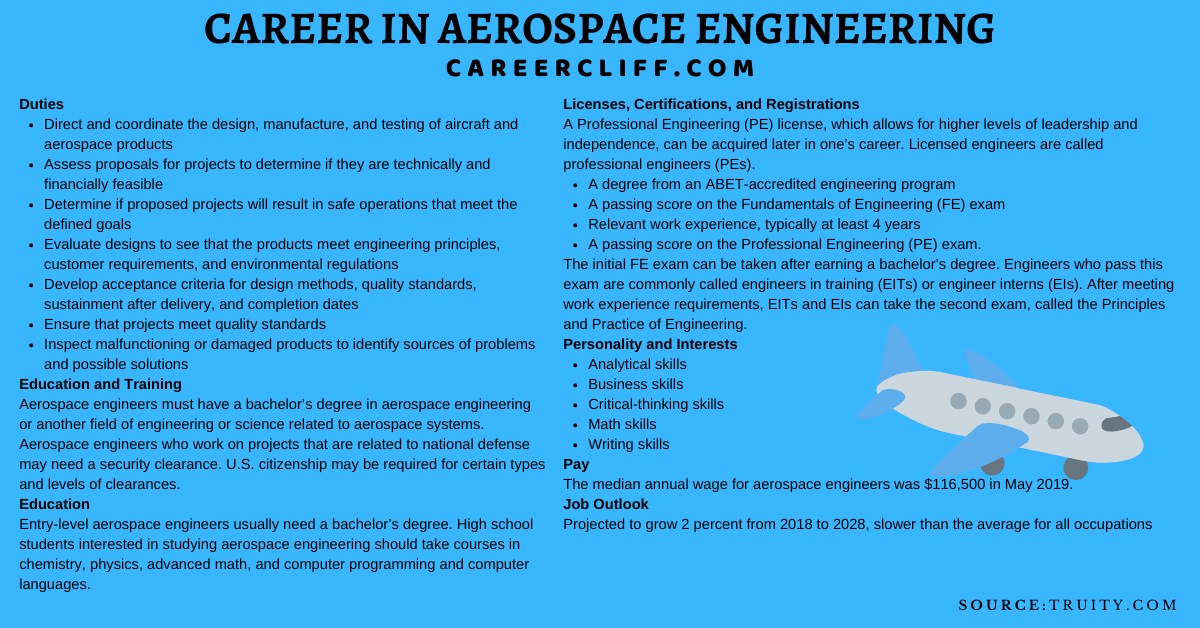 With proper career planning and the right decision with the right course in the right university, a candidate is able to reach his destination.

Let’s look from the beginning. Astronautics is a concept, a theory, and a practice related to navigation outside the Earth’s atmosphere. It is also called cosmonautics by some sources. The study of Astronautics is called Astronautical Engineering.

Astronautics has several sub-disciplines of science that an astronautical engineer also needs to have knowledge and understanding.

Astrodynamics: It is the area of study related to orbital motion. Engineers having specialization in this area analyze issues like- ballistics, spacecraft trajectories, and celestial mechanics. Aerospace engineering courses offer elaborate learning on it.

Spacecraft propulsion: It is the area of research efforts related to how spacecraft change orbits, and how they are launched to space. Universities offering aerospace engineering courses deal with such issues.

Most of the spacecraft belong variety of rocket engines, as well as propulsion in chemical, electric, or nuclear particles, also taught under university courses, alongside aircraft engineering.

Spacecraft design: it is a specialized discipline of systems development and maintenance engineering that rotates around assembling all required subsystems for a specific satellite or vehicle which is going to be launched (or, launched). Aerospace engineering courses let a person know about it in detail.

Controls: It is a branch of Astronautics that deals with fixing a rocket or satellite in its targeted orbit, in the name of spacecraft navigation, and orientation in the name of attitude control of the vehicle. It is also in the curriculum of universities that offer up-to-date courses.

Related: Career in the aviation industry in next decade

It is the branch of study, that concentrates on aircraft like airplanes and helicopters that stay within Earth’s atmosphere by aircraft mechanical engineering.

It deals with the study of aircraft like satellites and rockets, which are operated from outside the Earth’s atmosphere.

An aerospace engineer deals with specialized activities relevant to aerospace. he is responsible to design passenger airliners, combat jets, communications satellites, intercontinental missiles, and alike. These things are not so frequently available in countries.

You will find many countries that import these things from abroad. Especially, some countries are famous for producing aircraft. However, there are plenty of aeronautical engineers needed to maintain these services. They also handle manufacturing facilities and airfields as well as the production and testing of the aircraft and missiles.

The next great employers are the engineering, architectural, and related services providers who offer more than 15% of the total job scopes provided worldwide. The average pay is $111,400 per year which is as equal to $53.56 per hour.

However, above all, technical consultants, management, and scientific consulting services providers are the highest-paying career makers in aeronautical engineering. They pay $184,730 per year, which is equivalent to $88.81 per hour, on an average for aerospace engineering jobs. A time befitting course from universities will be handy

Employment services, that go next with aerospace engineering, with a moderate salary of $129,910 per year, that is as much as $62.46 per hour, on average.

Predicted job growth for an aerospace engineer is 6 percent by 2026. This indicates a smooth growth of aerospace engineering jobs over the years with no decline. Having courses with excellent grades from famous universities will be compatible with higher salaries.

The future of aerospace engineering jobs with university courses will also indicate more unseen opportunities due to the technological innovation and need for humankind. However, fresh opportunities will be taken by those candidates having exclusive training in software, for example, C++, or with vibrant experience especially in stress as well as structural engineering, among others, offered by universities.

Related: Creative ways to find and relate passion in a career

Aerospace Engineering courses include a bachelor’s degree minimum or an equivalence degree in engineering from universities, and aerospace engineering undergraduate.

Related: The next big thing in a future career in the aviation Industry

According to the National Aeronautics and Space Administration (NASA), 45 active U.S. astronauts are in service were another 28 astronauts are working in NASA after having astronautical engineering. This is an indication that astronauts hold few of the jobs though they may have the most visible job in adventurous space exploration.

The interested applicants must first be selected for the astronaut candidate program run by NASA, it is the prerequisite for becoming an astronaut.

There are several eligibility requirements in the astronaut candidate program to be selected as, having at least 1,000 hours or 3 years of active experience as a pilot in a jet aircraft, aviation aeronautical engineering. Also, U.S. citizenship, a bachelor’s degree in biological science, engineering, mathematics, computer science, or physical science are among mandatory requirements. Applicants are to submit applications fulfilling the above requirements for the next call.

After sharp and neutral scrutiny from the selection body, eligible applicants are screened and called for interviews. Only highly qualified applicants with emotional intelligence and required social skills are selected for the next phase through additional interactive interviews and practical activities. Applicants prior to selection for the program are called at the Johnson Space Center.

Astronaut Candidate Program is a 2 years intensive training program, that includes training in versatile areas like, military water survival, space physiology, spacecraft engineering, medicine and robotics skills, etc. Simulation facilities are also incorporated into the learning process that simulates a space atmosphere. A specific mission is assigned at the end of training to the candidates.

What degree area can be the best to choose?

NASA doesn’t recommend any specific academic fields that can be considered the best for qualifying for an Astronaut Candidature. It doesn’t recommend any degree over another to get the position. It also doesn’t specify any degree that might be found more competitive in future jobs, even in aerospace engineering companies, like Grumman Aircraft Engineering Corporation.

The candidates should select an area of study where she has an interest. It will keep you personally motivated and satisfied whatever you do.

However, there are some qualifying degree options for astronauts, such as Physical Science, Engineering, Computer Science, Biological Science, or Mathematics. Useful information on current and past astronauts can be found here.

What are the age restrictions?

The interesting fact is that, apparently, astronaut selection requires no age limitation. From the record, it is found in the past that the astronaut candidates selected from between the ages of 26 and 46, that is, the average age for the selection process is 34.

Is dual citizenship eligible for the Astronaut Candidate Program?

Under international agreement, countries having their own Space Agency, like Russia, Canada, Brazil, Japan, and Europe also select International Astronaut over time.

Which college or university is the best for a degree?

NASA don’t recommend anyone specific college or university for having a degree, any of the accredited institutions will do for NASA aerospace engineer.

What experience is required?

As a part of minimum eligibility, the program will be demanding either 3 years of professional, hands-on experience, or 1,000 hours of pilot-in-command time in any jet aircraft, that can be attained by the military. No flying experience is required. Yet, having this experience will be an added value.

Can anyone apply with surgery to improve visual acuity?

Yes, PRK and LASIK eye surgeries are allowed, along with an operative report on the surgical procedure that proves the passing of one year of time.

Which is better– a civilian or military?

Military service or experience is not a requirement to be enrolled.

How much annual salary does an astronaut get?

Academic achievements and experience set the criteria for salary. Actually, salaries for astronauts are decided by the General Schedule pay scale for grades GS-11 & GS-14 of the Federal Government. Presently a GS-11 candidate receives $66,026 per year whereas a GS-14 gets a salary up to $144,566 per year.

You may contact the Flight Medicine Clinic at 281-483-7999, for your medical-related queries.

Now you have an understanding of aerospace engineering salary, courses, scopes, jobs, and universities. Aeronautical engineering technology is progressing. Take your decision on the future job trend and get ready for taking the challenges with your charismatic leadership qualities.

Related: 5 reasons why people do not perform at their best