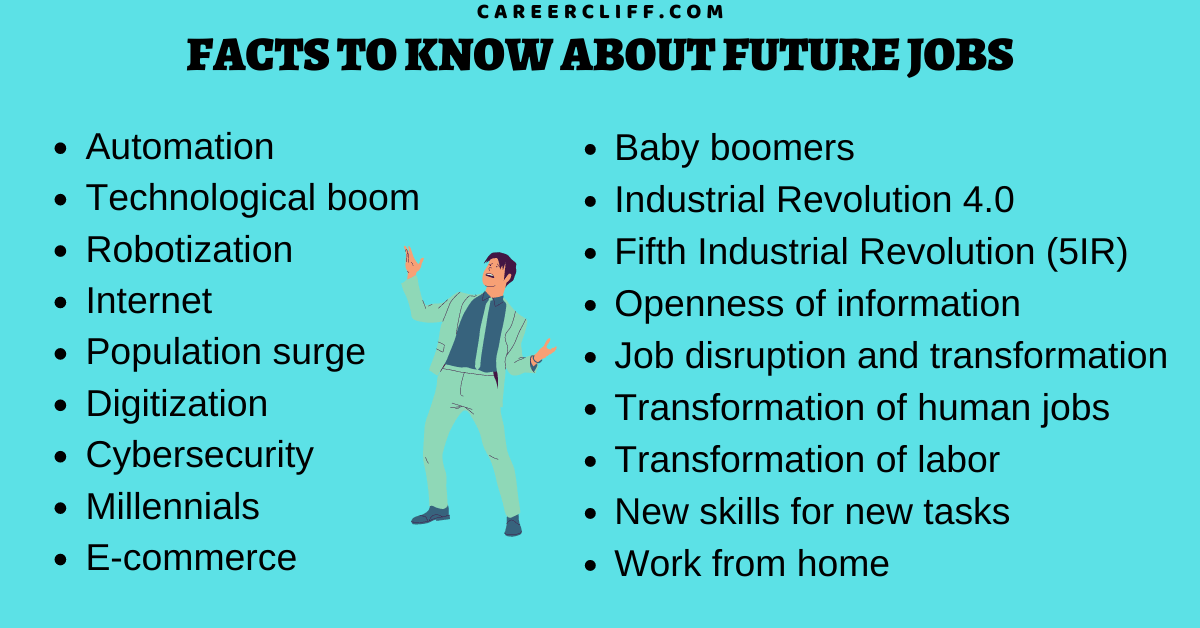 With the transformation of the business, economy, and employability factors, the future of work has been passing a significant drift with some distinctive signals to the future of employment for the world of work in 2030. There are a lot of facts to know about future jobs.

Simply said, the future of work is a forecast for how work, people, and the workplace will change in the next years. It’s an issue that keeps many CEOs awake at night as they make decisions that will allow their companies to prosper now while planning for the future.

There are several facts to know about future jobs. People need to know some career facts, career futures, and how technology, data science, and other issues will change the future of work. This article intends to share 16 facts for everyone to know about jobs to think about for the future.

At the same time, demographic variables and increase, need for the consumers, and the influence of the technological boom has caused the future of jobs a reality for millions of workforce and business organizations around the globe by offering the most in-demand jobs for the future.

Related: Future job trend: which job sectors are going to rise next

The need for accepting the change, as well as keep pace with the transition, which is further overwhelmed by the need for skills, experience, and self-development initiatives has forced the job seekers and employers to accommodate the career future.

The process of automation will be found more different in different industry sectors. The adoption of new technologies will be continued in various industries. Automated software, gadgets, and apps will be dominating the working environment in the organization.

The machine will begin to work on reasoning and decision-making, administrative, information search, communicating, interacting, coordinating, managing, and advising. Tech careers of the future are on the surge.

Technology and the future of work have been predictable destinations, as one of the vital facts to know about future jobs. Robots will take place of many manual jobs before. Artificial intelligence will be controlling production, supply chain, and manpower mobilization in corporate organizations and many future work jobs.

Different types of robots like, stationary robots and movie robots are getting more popular day by day. AI automation and the future of work have improved the work styles although robots are taking our jobs to a great extent. People are to devise jobs to think about for the future.

High-speed internet has already been in its action for the last two decades. The situation will be leapfrogging day by day. High-speed mobile internet has brought networking and connectivity cheap and accessible to major communities.

As per statistics, in May 2016, there were 151 million employed people among the 253 million in the U.S. that made up the civilian noninstitutional population. The employment-population ratio was 59.7 percent. There were 7.4 million unemployed people in May 2016.

Hence, 14.3 million jobs had been added to the economy over that specific time span, whereas the total population has grown by 15.4 million for jobs that will be needed in the future. This is the transition of the future of employment.

On average, 205, 300 jobs are required to be created every month just to keep work future up with population growth, It is estimated just by keeping the unemployment situation constant. A skilled workforce makes high-paying jobs in demand for the future.

With its vast influence, digitization will encompass the working force to adjust to it. Big data analytics, cryptocurrency, and cloud technology are set to mobilize a complex and unpredictable future of work that runs through technology and obviously looms a rise in future IT jobs. Prospects of AI are bright in the future of work.

People with technology back and the best degrees to get for the future are vibrantly moving forward to grab attractive tech careers of the future. In many cases, the robots will be taking our manual jobs with full-fledged automation and the thriving future of data science.

With the openness of information, companies will be facing more challenges in upholding their data security. Workforce experts in cybersecurity will be on-demand with high salaries amid all its transformation, and future of work by the grace of technology. No doubt, the future of cybersecurity job are on the rise sooner or later. It will also enable the future of remote work, and data science.

Companies will be more concentrating on their security system, which will enable them to rely on cybersecurity experts and policies and hope for the future of cybersecurity job industries. Occupations such as Data Analysts, Software, and Applications Developers will be on the rise, with positive signals for remote work in the future.

As per the Future of Work statistics, 24% of the U.S. people in 2010 were under 18, which was more than 74 million people to determine the professions of the future. Millions of them have since been included in the labor force. Millions of youth who were then in their teenage, in their twenties, and in college or grad school now accomplished their education and skills development.

These millennials have rushed to the job market in a very large ratio. A much more non-educated skilled and unskilled workforce is also in the streamline. Millennials are now in the job with their different style of professionalism, interest, and speed.

The US Census Bureau estimates that the birthrate (2016) was 8.6 per minute, where 4.6 people died that time every minute, plus 2 inbound immigrants (“net”) per minute, that in total get nearly 6 people every minute to impart the professions of the future.

Upon maturity, every one of them is added to the labor force, whereas the baby boomers are still fit, energetic, experienced, and healthy which doesn’t encourage them to retire. Baby boomers are in the driving seat to grab high-demand jobs in the next 10 years a good sign for remote work in the future. Automation and the future of work will be the center of everything. People will be drifting to top degrees in demand for the future.

Disruptive technologies will radically transform the workforce of the Fourth Industrial Revolution. Industry 4.0 and the future of jobs are interlinked. where future IT jobs may be on top of the list.

The burning need for a change of skills and exceptional talent, creativity, productivity, and ability to crash barriers will be able to develop quality genius through the intensive process of collaborative learning. Bypassing the formal PSET system, a new way of learning and training is in action to produce future-focused skills.

The affluence of e-commerce industries has transformed the physical existence of businesses, as well as real office staff. Instead, online shop, controlled by virtual offices, dbots, and employees has set a craze for the workforce. The future e-commerce trend is really surprising. This boom also drifts the jobs that will be in demand in the next 10 years.

Occupations such as E-commerce and Social Media experts will significantly be risen up depending upon the technology.

Related: 10 ways to make global e-commerce easier for everyone

We live in an era of collaboration and sharing. The information has been valuable, and it has been open through the internet. When you have information, and also, have access to it, you will be mighty with respect to business, strategies, and professional life.

This availability of the desired information and facts has shifted the challenges of the future workforce through collaboration, sharing, innovation, responsiveness, and collecting feedback on new jobs in the future. The openness of information is also a blessing for the future of remote work.

Future of work statistics describes, that emerging professions are predicted to grow from 16% to 27% by 2023 with a surge in some high-demand jobs in the future. It is significant that top IT jobs will be in demand in the future.

On the other hand, jobs that have technological obsolescence will be declining from 31% to 21% by the same time to redirect with some new jobs in the future. Most in-demand jobs for the future attract many more eligible candidates worldwide in jobs that will exist in the future.

It is estimated that more than 75 million current job positions might be null by the drift in labor between humans, machines, and algorithms. This signifies the split of the jobs that will be in demand in the next 10 years.

On the contrary, more than 133 million new job roles might be existing by 2023. In fact, Industry 4.0 and the future of jobs are leading the transition.

Jobs like Urban Planner, Customer Service Professionals, Tech professionals, Sales, and Marketing Workers, Energy experts, Training and Development, Strategic Planner, People and Culture, software engineers, Organizational Development Specialists, Aviation professionals, Innovation Managers, Medical and nursing, future occupational therapist, etc. will still be available for the eligible workforce. It is one of the significant facts to know about future jobs. People will be more inclined to be working from home in the future.

In the coming days, a division between human beings, robots (machines), and math (algorithms) will be shifting drastically, with a rising need for working from home in the future. Undoubtedly, there will be many top IT jobs in demand in the future.

A source says, 71% of total work hours are currently covered by human workforces. The rest 29% of jobs are completed by machines, emotional intelligence, or algorithms as a whole.

By the next five years, this average is projected to be transferred up to 58% of task hours to be accomplished by the human workforce, and 42% to be completed by machines, emotional intelligence, or algorithms.

By the year 2022, more than 62% of companies will greatly be depending upon the machine for accomplishing data processing, information search, HR and transmission, and other jobs needed in the future.

It will be a very significant challenge for human beings to acquire new skills that might be useful to keep pace with the imminent changes in future jobs. There will be a greater drifting in skills requirements in the next five years in order to cope with the jobs that will exist in the future.

Every career such as a Future Occupational Therapist will be run based on new skills. Along with medical careers in demand for the future, every other possible field will see a transformation in jobs needed in the future.

Apart from skills stability as it is now, professionals will find an average transformation of 42% in required workplace skills by 2022. You have to have top degrees in demand for the future. You have to Improve your top soft skills that employers will look for in the future.

Skills in demand for future

What will you require in the future? Some of the most in-demand talents that you should study for the future to keep your job secure are listed below. Skills to be required for the future of work jobs, as well as working from home include-

This workforce drift will enforce many changes in the future. Industrial units and geographical reality will be hiring external experts, temporary staff, and freelancers to meet up their skills gaps through the skills audit process. With the change in diagnosing, medication, and cure, medical careers in demand will also be transformed in the future.

It is one of the crucial facts on the work future to know about future jobs. High-paying jobs are in demand for the future. Explore the best degrees to get for the future so that you can adopt changes and grab the high-demand jobs in the future.

A holistic action plan in the areas like workforce planning and distribution, reskilling, and upskilling will be the catalysts for a positive, proactive authority of these changing trends of the future workforce and the indication of future employment in the world of work in 2030, with future of work to be accomplished from remote.

Read More: Enhance your Emotional Intelligence in the workplace