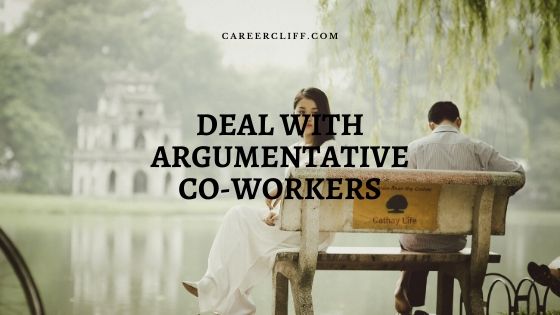 How to deal with hostile employees

However, if you prepare yourself to deal with an argumentative co-worker before an incident happens, you’re much less likely to react emotionally and exacerbate a potentially explosive situation.

Before you have to deal with your argumentative co-worker again, imagine all of the possible scenarios that could occur the next time he approaches you with an argument.

Stay calm and acknowledge what the person says. For example, say something such as, “I hear what you’re saying.”
2.

Identify with the person’s concerns as much as possible to diffuse their argument and move things toward a resolution. For instance, say, “I can see how you might think I’m not concerned about my part of the project.”
3.

Explain your viewpoint with tact and diplomacy. Do not raise your voice or make statements that place blame on your argumentative co-worker.
4.

Calmly give an emotionally immature co-worker two choices if she refuses to engage in a rational discussion. The first choice is to continue arguing without resolution. The second choice is to work with you to come to a resolution.

If you’re unwilling to discuss the issue with your co-worker when he approaches, let him know. For example say, “I can see that you are upset, and I am willing to discuss it with you later. Unfortunately, now is not a good time.”

If your argumentative co-worker won’t take your cue and calm down, excuse yourself. Do not waste your time talking to someone that won’t be reasonable.

Never return rude remarks or harsh comments to an argumentative co-worker. To do so will invite further rude and harsh remarks from the co-worker and delay a possible resolution.

I hope this article on how to deal with hostile employees was found interesting to you.